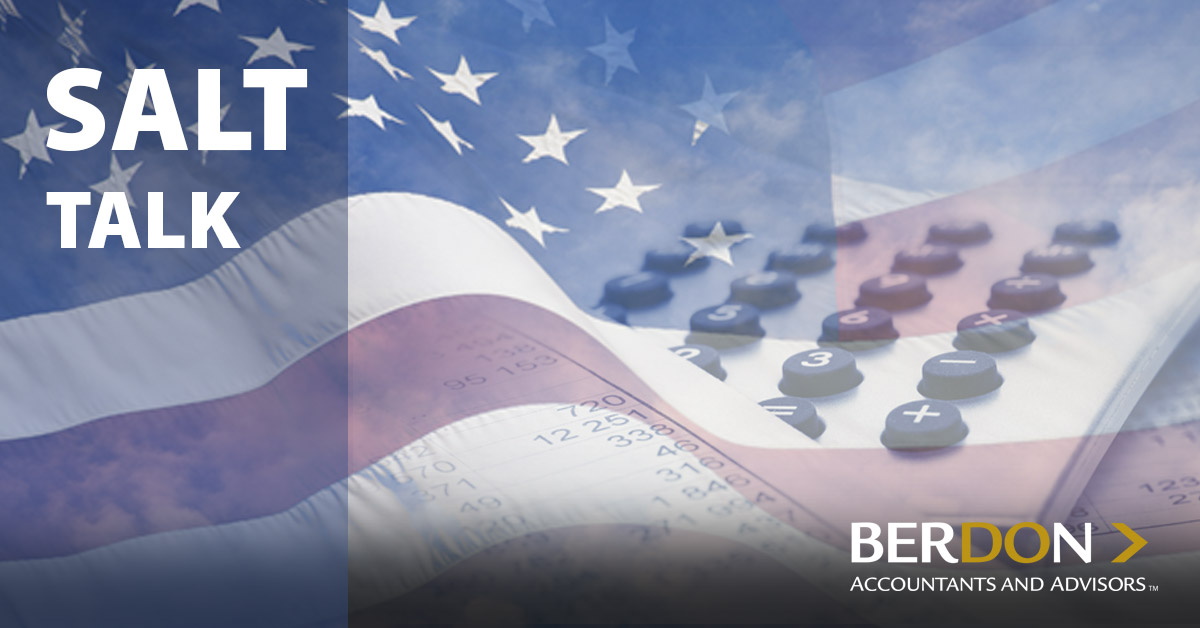 What do these three items have in common? Depending on whom you ask, they can all help you find your way. Not knowing much about life coaching, and as a male being devoid of the gene to ask directions (even from an inanimate object), I tend to be most helpful providing direction in the form of tax planning.

In an earlier blog, I discussed the trend towards single factor apportionment formulas. Today, we will address its first cousin, market-based or customer-based sourcing. In the old-world manufacturing economy, it was easy to “find your way.” You sent thingamajigs[1] to your customer in Ohio and (very) generally speaking, receipts would be sourced to the thingamajigs’ destination, Ohio. So a New York- based manufacturer would get the benefit of apportioning a percentage of his or her tax base outside of New York and either to Ohio (if there was nexus in Ohio, a topic for at least another 100 posts) or possibly to nowhere.

In light of the current COVID-19-inspired flight from New York, it is worth revisiting the issue of change of domicile. A New York State Tax Appeals Tribunal Decision[1] held that a taxpayer successfully demonstrated, by clear and convincing evidence, a change in domicile from New York City to Dallas, Texas. The extremely well-reasoned Opinion is notable in recognizing the domicile change occurred through a complex series of events and not simply by one overt act. Rather than simply reiterating the Tax Department’s own Nonresident Audit Guidelines, (which, despite what an auditor may tell you, are not the law) the Tribunal looked to the precedential jurisprudence and reminded all that a change of domicile is a question of fact, not a question of law. The circumstances surrounding the changes can vary widely depending on the individual.

The details of the Opinion are way too complex to cover in this short space, but the series of events which evidenced the intent to abandon the old domicile and establish a new one included the termination of a relationship with his long-term girlfriend, changing career goals and circumstances, listing of his $2.4 million New York City apartment, renting a small apartment in Dallas, and culminated with moving his “large, senior dog[2]” to Dallas.

This week’s post is unusual in that it takes us to two very disparate points in time: The first being sometime last week, and the second being the third grade. This week, one of my clients received a “Notice of Intended Federal/NJ State Offset.” It’s a good thing I paid careful attention to my third grade teacher, Mrs. Maupin, who reminded us at least once a week not to believe everything we read.

Just imagine that you are in a legitimate tax controversy with one of many tax jurisdictions. You are able to rest easily as you know it is being handled by your expert advisor at Berdon. The audit process was difficult but you decided, along with your advisor, that the auditor was simply inexperienced and clearly came up with the wrong result. So a timely protest is filed with the appropriate office. You even receive correspondence indicating your timely protest has been received and will be scheduled for review sometime in the future.

Many science fiction adventures have posited the idea of a parallel universe, but to my knowledge, we have not found intelligent life out there yet.Readers don’t fret. If you had your heart set on discovering a parallel universe, just take the lead of state government. Go out and create your own.

The parallel universe created by the states is known as the Use Tax.The Use Tax is a virtual mirror to the Sales Tax. It is imposed on the user of goods and services that would be subject to the Sales Tax, but for the fact that the seller or service provider didn’t charge and collect the Sales Tax.

For that new 90-inch TV you just purchased from www.wedon’tchargesalestax.com, your State is looking for you to voluntarily compute the amount that would have been charged as Sales Tax and submit it as Use Tax. Despite the mistaken belief that internet sales aren’t subject to tax, your State expects you to be a good citizen and hand over what you believed to be your savings.

Wayne Berkowitz, a tax partner and co-leader of the State and Local Tax Group at Berdon LLP, advises on the unique requirements of governments and municipalities across the nation.

SALT TALK: Who Let the Dog Out? – Legislation by Administration Leads to Confusion

I’ve never been without a pet and have always considered them to be family members, not tangible personal property. Apparently, the New York State Department of Taxation and Finance agreed with me when they held “[d]og walking is not among these enumerated services subject to sales tax[1].” Yet, less than two years later, the Department growled out another Advisory finding that “pet sitting, which includes dog walking, refreshing cat litter boxes, or providing food to the pets is subject to State and local sales and use tax[2].”

The Department reasoned that “. . . maintaining, servicing or repairing tangible personal property . . .” is an enumerated service and the Regulations clearly define animals to be tangible personal property. Why the sudden shift in opinion? I would like to think it was the Department’s desire to administratively broaden the tax base and not due to any bias against cats[3].

Service businesses subject to the NYC Unincorporated Business Tax may see a significant reduction in their 2020 UBT liability due to employees and agents working from home outside of New York City. My colleague, Richard Goldstein provides the details here.

State tax planning and the lottery; what does that have to do with me? I buy a ticket, I win, I pay my federal and resident state tax, and I still walk away with a large sum of money, right? Well, yes, but if some states have their way, maybe a little less. If you thought the pandemic was causing odd withholding results, the lottery has been causing problems for some time.

Our experts examine the latest trends, economics, business conditions and industry issues to provide timely information you need to maximize your tax advantages and meet your financial goals.

SALT TALK: Hear an insider’s perspective on the business issues, legislative updates in state and local tax, and tax aspects behind today’s headlines.

T&E TALK: Gain insights into how changes in tax laws, shifts in the financial markets, and regulatory concerns will impact assets and affect preserving and transferring wealth.

TAX TALK: Get an all-inclusive perspective on regulatory changes, industry issues, and trends from our team of multidisciplinary tax professionals – many of whom also hold J.D. and LL.M degrees.